Michael pointed out the front windshield at the blue sky and said: “Pastor, there’s a lot of pain in this world, a lot of people suffering right now, but no one suffers from bearing the weight of it all like God.” Photo: Pexels.

There are good reasons to avoid watching the evening news these days. It is a rough slog, even for those with sunny dispositions.

The pandemic has severally thrown us off the normal rhythm of life. Piped-in crowd cheers at baseball games, shuttered businesses on Main Street, empty classrooms, drive-up eucharist at church, Zoom meetings for work.

Once only thought to be the essential accessory of surgeons, fumigators, and bank robbers, face masks are now used to stoke our political divide. No more hugs, nor kisses on the cheeks. Forget the handshake. The entire elbow bump looks ridiculous and feels even more absurd.

Sadly, we cannot even have proper funerals for our dearly departed — and there are so many of them. We have much to mourn and now we must do it in isolation.

It seems as though one traumatic event leapfrogs another. There is a good chance that you have someone in your circle of friends who has either radically withdrawn because of depression or grown numb emotionally because of crisis fatigue.

“The sense of groundlessness has set off a spike in anxiety,” writes Joe Robinson in an article about stress management in the Los Angeles Times. “What’s going to happen to my health, my job, my family? Is takeout food safe? Will there be a depression? How long will it be before we can return to normal? Coping with existential threats in the fog of so many unknowns is a major challenge for folks programmed to make life predictable and, therefore, more safe.”

For entertainment, we thrive on cliffhangers in movies and sports because we know there will be a finale. “It’s a different story when it comes to personal uncertainty, and it’s worse when the unknown is open-ended, as with the coronavirus,” writes Robinson.

In other words, there is nothing normal about the new normal.

The Rev. Kenneth Tanner is a treasured friend of mine and pastor of the Church of the Holy Redeemer, a congregation in Michigan. He recently told me about one of his parishioners, Michael, who had been missing for almost four weeks. “Like millions, he exists at the margins” and all of this pandemic craziness proved to be “too much.” Michael “just couldn’t handle his unbearable existence anymore. He walked out the door of his apartment one night without telling a soul and just drifted away.”

When he first arrived at his parish many years ago, Ken pledged that he would help all those in need that God sent across his path. After Michael missed a couple of services, my friend Ken went looking for him. Discovering that no one in Michael’s apartment complex had seen him in three weeks, Ken’s heart sank.

“With help from the homeless community in Pontiac, some good shop owners, the Oakland County Sheriff’s Office, and a member of the congregation,” Michael was found and Ken was overjoyed. “He matters to me and to our church.”

Ken took Michael to talk to his landlord and try to work out any issues related to the lengthy absence. “A lot remains to be done to restore some semblance of togetherness for his life — logistics and resourcing — but he is resting well” at the church facility in the meantime as they tend to his needs. After all, Michael had spent nearly the last four weeks under a concrete staircase without showering or eating a proper meal.

My friend Ken was there for Michael — looking for him high and low. These are tough days and God bless those who are on the lookout for the souls who are struggling to cope — Heaven’s bloodhounds of compassion.

As the two of them were driving back from the meeting with the landlord, Michael pointed out the front windshield at the blue sky and said: “Pastor, there’s a lot of pain in this world, a lot of people suffering right now, but no one suffers from bearing the weight of it all like God.”

Michael spoke the truth about a God who refuses to cast a blind eye toward suffering and injustice. “But you, God, see the trouble of the afflicted. You consider their grief and take it in hand. The victims commit themselves to you; you are the helper of the fatherless” (Psalm 10:14). He spoke truth about the God who knows the number of hairs on our head and the fluttering migration of the sparrow.

While there will be a time when there will be no more sickness or death, that time has not yet arrived. In the midst of our storms and delayed mourning, God bears the gravity of it all.

Before Jesus bore the weight of the cross, he first served with basin and towel to show his undying love. “Jesus knew that the Father had put all things under his power, and that he had come from God and was returning to God; so he got up from the meal … and wrapped a towel around his waist. After that, he poured water into a basin and began to wash his disciples’ feet” (John 13:3).

This moment of selfless love was brought to memory when I learned about a couple — Steve and Mary in Jacksonville, Florida — who were separated by a pane of glass for 114 days because of COVID-19. 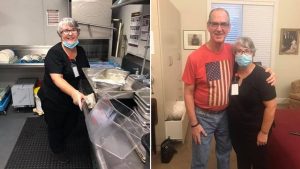 Facebook photos of Mary Daniel and her husband, Steve Daniel.

Steve is in a retirement facility for those with early stages of Alzheimer’s disease. Mary is the top executive for a successful company. Since last March, she has faithfully visited her husband in the evenings and tucked him into bed until he fell asleep. When the pandemic struck, a state order barred visitors from assisted-living facilities. Steve was confused; Mary was heartbroken. She loved him so much but could not touch him.

“It didn’t matter what I had to do to get there,” Mary told the Washington Post. “I was willing to do whatever it took to fulfill my promise that I was going to be there for him every step of the way.”

March 10 was the last night she was able to spend with her husband. “I got a call on the 11th, and they told me I couldn’t come back,” she recalled. “I didn’t even get to say goodbye.”

Her mind raced for ways to get around the restrictions. “I reached out to the governor, talked to local reporters and called the parent company of the facility asking if there was anything I could do to get inside,” she said. “I even offered to bring my puppy as a therapy dog.”

In desperation, she went to his window at the facility. That turned out to be an especially cruel barrier. “I did that twice, and he just cried,” she recalled. “I decided not to do that anymore, since he’s better when he’s not crying at the window. That wasn’t doing him any good.”

But love often finds a way. Or, as a popular U2 song reminds us, “Love is bigger than anything in its way.”

Mary discovered a job opening for a dishwasher at the facility. In order to get her foot in the door as a cleared employee, she had to do a drug test, a background screening, a Covid-19 test, and video training — all so she could have a part-time job that she does not need.

Nevertheless, with joy, she works hard scrubbing plates and pots twice a week as a dishwasher so that she can walk down the hall and knock on Steve’s door.

“Mary” he exclaimed when he opened the door for the first time. They hugged for a very long time. And they both cried — this time with gratitude.

“I wanted him to know that he is deeply loved and he will never be alone,” she said on the Today show. “That’s the best gift I can give for the rest of his life.”

During these Alice in Wonderland days of strangeness and chaotic rhythms, we are asked to socially distance, wear a mask, and wash our hands.

And, if you walk the path of love, look for those who are having difficulty coping and be prepared to wash a few dishes.