At the height of the government mandated lockdown earlier this year, Kraft Heinz factories were operating around the clock in order to meet the demand for macaroni and cheese. According to the New York Times, retailers at the same time saw a 50 percent increase in demand for Slim Jim beef jerky and Chef Boyardee pastas.

Apparently, even some of those who had been eating organic kale and quinoa salads were turning to foods they had banished from their cupboards. “Consumers are reaching for foods that trigger a comforting childhood memory or simply their go-to snack when they need to relieve stress,” the Times reported. In an era of instability, we all look to the safe haven of comfort food – savoring the tastes, smells, and good memories.

My comfort food is a Double-Double Animal Style, a signature menu item at In-N-Out Burgers, a Southern California-based phenomenon. “No Microwaves, No Freezers, No Heat Lamps” is one of the company’s time-tested commitments. The simplicity, freshness, and mystique has garnered a passionate fanbase from Hollywood hot shots to celebrity chefs who crave an In-N-Out fix.

McDonald’s vs. Burger King, Shake Shack vs. Five Guys, Wendy’s vs. Jack In the Box. I leave the debate to others. I’m a lover, not a fighter. When I fly home to the West Coast to see my family, the first stop from the airport is In-N-Out. Go ahead, ask my mom and dad. In-N-Out reminds me I’m home.

Founded in 1948 by the innovative Harry and Esther Snyder, In-N-Out has had the same minimalist menu for the last 72 years. It is a privately-held, debt-free family company committed to strategic growth, high quality ingredients, and paying its employees better than any other fast food chain. There are 358 bright red-and-white retro-style restaurants in six Western states with a gigantic yellow arrow pointing the way to a premium burger.

Two years ago, Lynsi Snyder-Ellingson, the Snyder’s granddaughter, was on the cover of Forbes as In-N-Out’s President and CEO. Analysts speculate that the company is worth about $3 billion dollars – a far cry from the spartan 10×10 foot hamburger stand of its humble origin. “I felt a deep call to make sure that I preserve those things that [my family] would want. That we didn’t ever look to the left and the right to see what everyone else is doing, cut corners, or change things drastically or compromise,” Snyder-Ellingson told Forbes. “I really wanted to make sure that we stayed true to what we started with. That required me to become a protector. A guardian.”

The 38-year-old leader has consistently been recognized in the top tier of Glassdoor’s list of bestCEOs ranked by employees. In 2019, she was listed as #3 with a remarkable 99 percent approval rating.

Carrying on a family obsession, Snyder-Ellingson is also a drag racer,competing in amateur categories with the National Hot Rod Association. Her grandfather was part owner of the Irwindale Raceway in the 1960s and sold hamburgers out of the track’s concession stands. In-N-Outs became a hangout for hot rodders. She actually races in an orange 1970 Plymouth Barracuda. “I’m a lot like my dad, a little bit of a daredevil,” she told Orange Coast Magazine a few years ago. “I like an adrenaline rush. My dad took me to the racetrack for the first time when I was 2 or 3. … Anything with a motor, that was in my blood.”CEOs ranked by employees. In 2019, she was listed as #3 with a remarkable 99 percent approval rating. 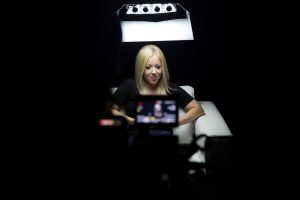 Her unanticipated path to leadership in the business has been strewn with heart-wrenching tragedies. After her grandfather died in 1976, her uncle took over the family business until he was killed in a plane crash in 1993. At that point, Lynsi’s father took over until he died from a prescription drug overdose in 1999. Lynsi’s grandmother died in 2006. At age 28, Lynsi inherited the entire company in 2010. During all this turmoil, she experienced a string of broken marriages and escaped two failed abductions.

“I didn’t always serve and pursue God with my whole heart,” Snyder-Ellingson confessed at the commencement for Biola University last year. “My past is filled with pain. I chased after things of this world only to find myself feeling even more empty. In my brokenness, I was reckless.”

She spoke openly to the graduating class of the Christian school in La Mirada, California, about her failed marriages, family tragedies, and abuse of marijuana and alcohol. “I know God has given me a story to show others the power of his relentless pursuit of our hearts as his children to show how he can use even the most broken people if they surrender a willing heart to him,” she said.

In the middle of her high-profile public failures, Snyder-Ellingson wrestled with intense guilt. “I started to believe that I deserved to be treated like someone with a scarlet ‘A’ on their chest.” For a time she believed that she was being punished for her mistakes and that she somehow deserved to be mistreated and abused in her relationships.

She testifies that her faith eventually broke the grip of her shame. “God brought me to a place where I truly got to know a Jesus who walks on water, Jesus who heals the sick, and the God who saw beauty from my ashes,” she said. 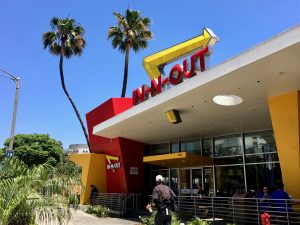 “Today, God has transformed my life, freed me from being ‘the woman at the well,’ and allowed me to serve his kingdom through multiple foundations that I am passionate about.” She directs the In-N-Out Foundation, an organization which fights child abuse and runs an organization called Slave 2 Nothing, which helps victims of human trafficking and people suffering from addictions.

Snyder-Ellingson and her husband also founded a discipleship ministry called Army of Love that was inspired by Isaiah 61: “He has sent me to bind up the brokenhearted, to proclaim freedom for the captives, and release from darkness for the prisoners.”

Moving from the black sheep of the family to the visionary CEO of an iconic company was a painful journey. Snyder-Ellingson has chosen candid vulnerability and grace to move forward with the passion of a former captive who has been set free.

“I want to encourage you that God can use the broken parts and the beautiful parts of your story for his glory,” she told the graduates. “So I will leave you with these two words: Live radically. Jesus’ disciples were called to live differently, to do things that hadn’t been done before, to have authority unlike ever before in the name of the Holy Spirit. Do not deny the leading of the Holy Spirit in your life as he reveals radical truth to you in your journey.

“Go out into the world and live a life worthy of the calling of Christ – a life that is making an impact for the Lord Jesus Christ in our world,” she concluded. “Die to self and throw out trying to please man. Fear God and please him to the end.”